Focus on the co-benefits

Species are becoming extinct at about 1000 times baseline rates, the oceans are becoming more acidic, large amounts of forest are changing to grazing land and crop land, and in the process we’re losing soil faster than natural processes can regenerate it.

These were some of the sobering facts highlighted by Dr Howard Frumkin, head of the Wellcome Trust’s ‘Our Planet, Our Health’ programme, as he delivered the opening keynote at the 2nd Healthy City Design International 2018 congress in London this week.

Over the course of this century, planetary, climate and ecosystem shifts are likely to present an increasing number of profound challenges to cities in both the northern and southern hemispheres. Dr Frumkin outlined four, the first of which – preparedness, in the face of extreme flooding and heatwaves – focused heavily on the overall theme of the conference, ‘Creating healthy cities for all: designing for equity and resilience’.

“We know that rising sea levels over the long term, punctuated by sudden storm surges, risk the inundation of some coastal cities,” he remarked. “Add to that one of the impacts of urbanisation, which is land subsidence, due to water extraction from fresh water cables beneath cities, and that means that cities from Miami Beach to Jakarta are already experiencing extreme flooding – even in times of fair weather.

“Looking forward, we know that we have well over 500 cities that will experience rising sea levels and chronic flooding with more than 800 million people at risk.” 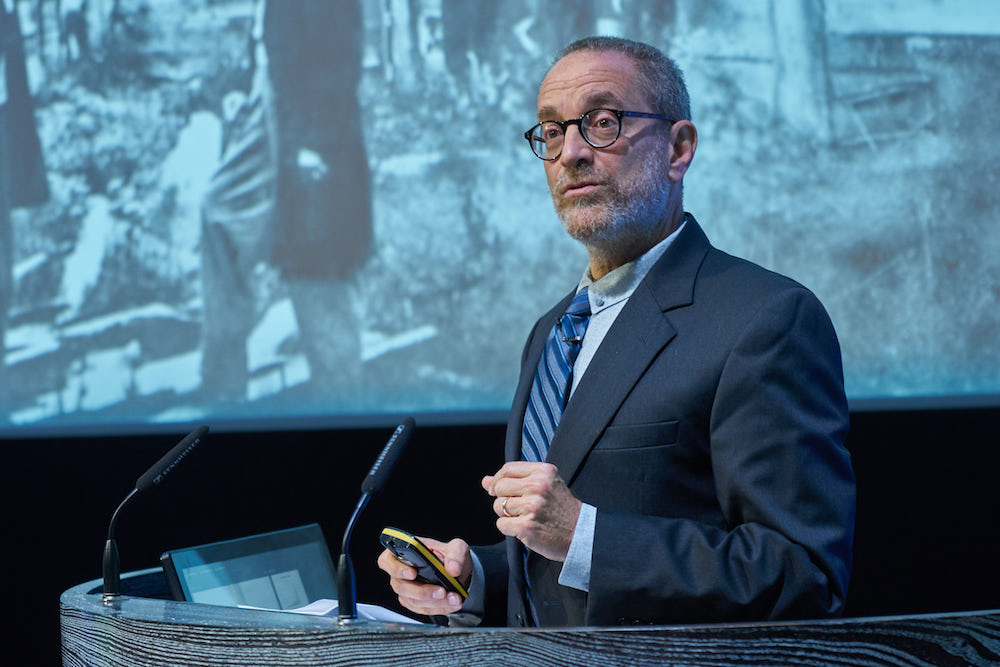 Rising temperatures will also test cities and citizens’ resilient capabilities, said Dr Frumkin. “Looking forward, projections are that many regions of the world will experience heatwaves that are longer lasting, more frequent and more intense, to the point that some regions of the world are predicted to become virtually uninhabitable,” he explained.

Moreover, rising temperatures are compounded in cities owing to the urban heat island effect, the lack of vegetation, dark building surfaces that absorb heat, and the growing problem of water scarcity.

How to plan and design cities for the potential sudden influx of large numbers of climate refugees will be of key importance over the course of this century – and there are several examples in human history of cities having to vacate their premises, such as the great Mayan civilisation in the Early Americas, and, more recently, the people of New Orleans, as a consequence of the devastating Hurricane Katrina.

Said Dr Frumkin: “When we think about healthy city planning, we need to think not only about resilience and adaptation to disasters but also about something much less familiar: sudden influxes of large numbers of people whose health and wellbeing must be at the centre of our design thinking.”

Moving on from the apocalyptic, Dr Frumkin also posed some aspirational challenges. “How do we imagine, configure and manage cities that are not only healthy but also sustainable?” he asked. The answer, he suggested, lay in the notion of convergence and co-benefits. Strategies such as transportation alternatives, good density, connectivity, mixed land use, activity centres, parks and green spaces, smart growth, and healthy urban planning also happen to be strategies for sustainable urban planning.

“These are co-benefits and help drive policy in positive directions, and they help tell the story in compelling ways so that demand for healthy city design and sustainable city design increases.”

Listening to and acting on the available evidence, as well as continuing to build the evidence base, are also vital, and Dr Frumkin had a plea for the designers, planners, public health professionals in the audience: “Each time you do a project, think of it as an experiment, not just as a project. Think of it as an opportunity to study the outcomes, perhaps a before and after study.”

Designing cities to make people happier is another challenge worth exploring, said Dr Frumkin, and in this regard, the importance of social connectedness and health are major influencers of happiness, and vice versa.

Through this evidence, design mandates emerge, he explained. “In polluted cities, people are substantially less happy. People in noisy areas are less satisfied than people in quieter areas. Physical activity is an effective anti-depressant. . . Each of these is a clear design mandate for happiness, and for health, and for sustainability. Planetary and human health converge through the lens of happiness.”

The fierce urgency of now

The choices for humanity are clear, he argued: “We need to work to replace profligacy with restraint, extravagance with modesty, wastefulness with thrift.”

Systems thinking, he stressed, needs to be implemented to overcome our infatuation with technological silver bullets. And, scientific discourse is too dispassionate in the face of a world in which “our house is on fire” and urgency is a necessity.

But there are reasons for optimism, concluded Dr Frumkin; for example, in the rapidly dropping price of renewable energy, in the increasing energy efficiency of motor vehicles and take-up of electric vehicles, and in the advance of green building technologies.

Organised by SALUS Global Knowledge Exchange in collaboration with The Helen Hamlyn Centre for Design, Royal College of Art, the Healthy Cities Design 2019 International Congress & Exhibition will be held at the Royal College of Physicians, London, on 14–15 October, 2019.